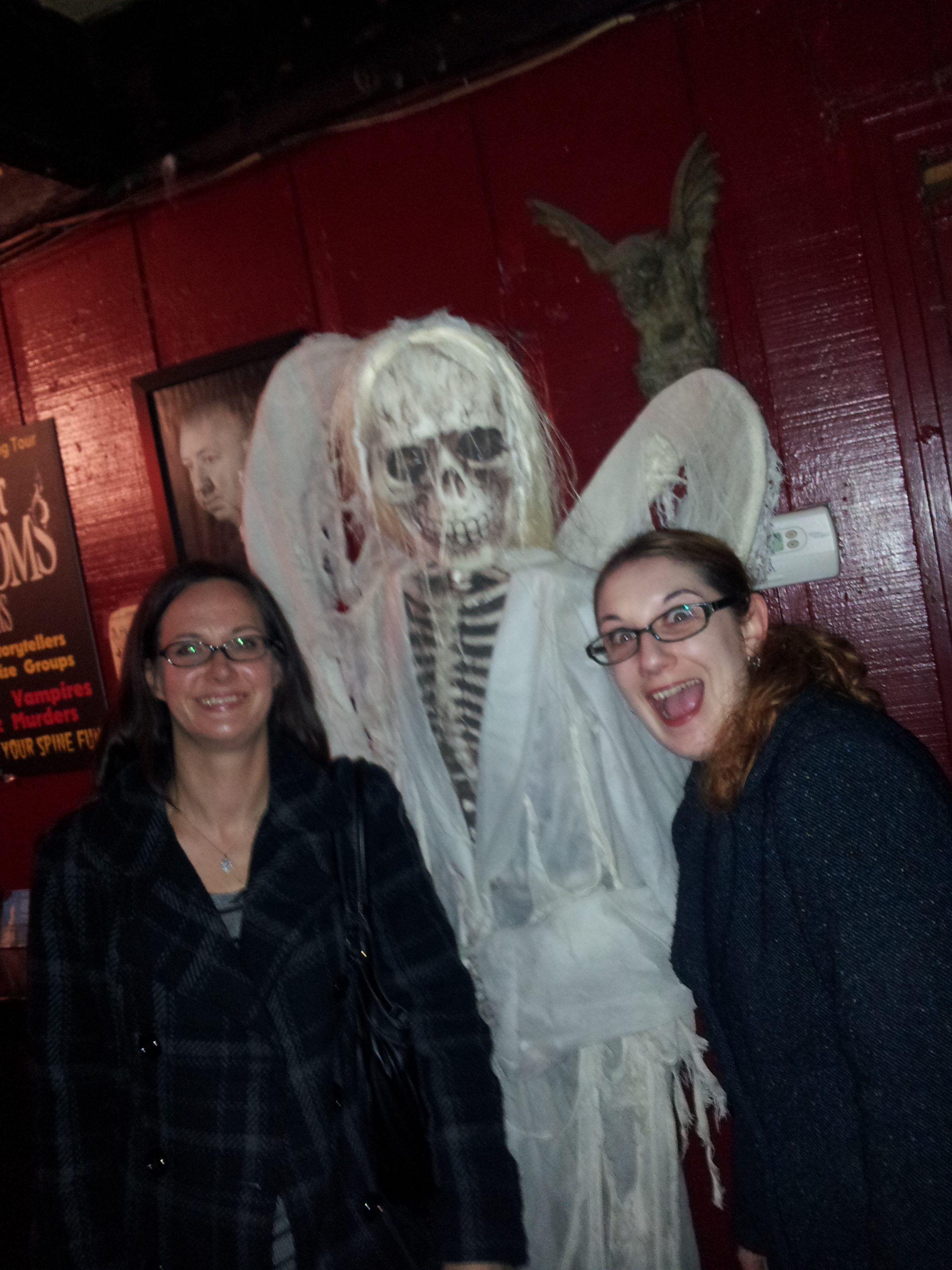 New Orleans is a city steeped in mystery and rich culture. A place where signs such as this are the norm. So naturally, when I was looking for a setting for my novel about witches, New Orleans seemed a perfect choice. During the developmental phase, I scoured the internet for all I could find to get a feel for this beautiful city. But street view and Google images could only get me so far. Ultimately I decided I would get a much better feel for it if I actually went there. So, after completing my first draft of The Curse of the Bruel Coven, I set out on a research trip with two of best friends.
In January of 2014, we landed at the New Orleans airport and the smell of the Louisiana Bayous quickly filled the cabin of the plane. We had arrived! We got in our rental car and crossed the Mississippi, heading for the French Quarter.
The Cornstalk Hotel

We stayed at the Cornstalk Hotel. Built in 1816, it’s listed on the National Historical Register. It gets its name for the cast iron fence in front of the building added in 1840 by the owner for his wife, an Iowa native who had become homesick. It is located on Royal Street, a street that certainly lives up to its name, lined with art and antique shops and is great for window shopping. The hotel is also known for being one of the most photographed hotels in the French Quarter and we soon became well aware of that during our many comings and goings.
The inside of the hotel is exquisitely decorated with antique furnishings, similar to how I envision Grand’Meres house.

The view from the balcony of the Cornstalk.

New Orleans offers a wide variety of unique tourist attractions, everything from museums to shopping and steamboat rides up the Mississippi. There is something for everyone.
The Ghost & Vampire Tour

The Ghost & Vampire tour is a nightly walking tour, starting at Flanagan’s Pub where you can have a drink and pose with a skeleton before embarking on your haunted adventure.

One of the stops along the tour was at Madame Delphine’s House of Torture. It is said that if you walk underneath the gallery you might be taking something home with you.  Our tour guide Luke gave us his commentary, safely on the other side of the street.

Another was the Andrew Jackson Hotel, said to be the most haunted hotel in New Orleans. Guests have reportedly awoken to find pictures of themselves sleeping on their cameras.

But the best of the tour was the Jean Lafitte’s Blacksmith Shop. It is located on the quieter end of Bourbon and it dates back to 1700’s. Rumored to be one of the most haunted bars in New Orleans, the story we were told is that Lafitte’s right-hand man had been caught stealing gold so his head was burned in the very fireplace that stands today.  Legend says, sometimes the pirates face appears in the flames.

While in the bar, I took several shots of the fireplace in hopes of catching a glimpse of the face in the fire. Later that night while back in our room I was scrolling back through my pictures of the tour and much to my surprise I got something! If you look closely in the center of the two flames, you can see eyes and a nose. I promise you, this picture is not photoshopped in any way.
Swamp Tours
Since some of my characters lived out in the swamp, I figured a swamp tour was in order. With just a short drive outside of New Orleans into the Jean Lafitte National Historical Park is the Jean Lafitte Swamp Tour.

You hop aboard a little boat like this and cruise down a canal and out into the bayou. It was a fascinating experience with a wonderful Cajun tour guide who was very knowledgeable about the local plant and wildlife.

Though January is unseasonably cool, we were lucky and saw quite a few gators soaking up the sun on the warm afternoon.

Along the Bayou, the knees of the cypress trees stick out above the water. These knees are actually the plant’s root system, where the tree gets its oxygen. Most of the trees are draped in Spanish moss, which we learned doesn’t kill the trees. It was once used as stuffing for beds.

Plantation Tours
While visiting New Orleans there are many Plantation Tours to choose from. I strongly recommend seeing one, it was without a doubt the highlight of our trip.

Oak Alley Plantation
We chose Oak Alley because I had been using it as the inspiration for the Shady Oak Plantation in my novel. I later found out it is also the house Louie burns to the ground in the movie adaptation of Anne Rice’s Interview with the Vampire. The grounds of this plantation are simply stunning with beautiful gardens and these magnificent three hundred year old trees, planted sometime in the early 1700’s, well before the house was built.

The sound of the ringing bell every half hour signifies the start of the guided tour of the main house, given by staff dressed in antebellum period clothing.  On your tour, you will learn about the history of the house and all its owners.

We also learned about some fun customs of the Antebellum time period. Like placing a pineapple on the bed of a guest was a polite way of letting them know they had overstayed their welcome.

We also learned about the courting candle. If you have a daughter you may want to pick one up at the gift shop before you leave.

We also had a bite to eat in the restaurant. It is where I tried alligator bites. They were actually quite good, they tasted like chicken if you’re curious but not adventurous enough to try them. And my first mint julep.

Cemeteries
Guided tours are available for a price, we opted to go the free route and go it alone for our visit. St. Louis Cemetery Number One is one of many cemeteries located in New Orleans. Whether you visit any of the Saint Louis Cemeteries or The Lafayette over in the Garden District, a stroll through the cemetery certainly won’t disappoint.

New Orleans has a unique approach to burial not seen anywhere else in the continental U.S. The above-ground tombs or crypts house the cities dead. The tombs come in wide variety of designs, some being elaborate works of art, while others being of simple brick.

Crypts or vaults as they are sometimes called are, generally, family tombs meaning that they are used by the entire family.  After a person passes away their body is placed in the crypt for a year and day. The extra day, given out of respect, for the anniversary of death. During this time frame, the inside heats up much like an oven cremating the body in the Louisiana heat, hence the term “oven” vaults. After this time period is up, the groundskeeper will open the vault, and sweep the remains into a grate located in the back of the tomb where they will join all those who have passed before them.
St. Louis Number 1 is the where you will find the tomb of the New Orleans Voodoo Queen, Maria Laveau.

CUISINE
While there is no shortage of places to eat in New Orleans I have chosen to highlight a few of my personal favorites.
Just across from The Cornstalk we found a quaint little eatery. Café Amelie. Unfortunately, it was raining and we missed the opportunity to dine out in the courtyard. But the inside was equally as charming with the antique furnishings and combination of plaster and brick walls. It later beer became the inspiration for the cafe Desmond takes Vivienne and Savannah to in my book. Oh and the food, excellent! Do try their Jambalaya.

Breakfast didn’t seem to be a popular meal among New Orleans locals, but Beignets and Café au lait at Café Du Monde are a must! Though I will warn you, getting a table at this iconic establishment can be a bit of a hassle. It’s self-serve seating, so when you see someone getting up from a table, make a run for it.  Even if there is a long line Café Du Monde is well worth the wait!

And of course, no trip to New Orleans is complete without a trip to Bourbon Street.

Whether it’s dining or a party you’re looking for, Bourbon Street never closes. But don’t venture too far down past the bars, unless half-naked ladies is your thing. At night a section of Bourbon is blocked off to motor vehicles and becomes a huge block party. You can hang out in the street drinking if you so choose, watching various street performers. There’s also plenty of bars to choose from, live music can be heard pouring out from each establishment.
While in New Orleans, balcony dining on Bourbon Street is another must!

We ate at a little dive bar called Johnny White’s Pub & Grille. To get up to the balcony you had to climb an old steep spiral staircase so don’t get too drunk or you may have a heck of a time getting back down.  I was undecided with what to eat so I went for their Cajun Sampler, a dish that consists of red beans & rice, crawfish etouffee’ and shrimp creole. To describe it in one word would be delish!
I hope that you all enjoyed some of the highlights from my trip. Should you ever have the opportunity to visit New Orleans, I hope you love it as much as I did.
Author: admin
Filed Under: Author Journey, Behind-the-Scenes
Behind the Scenes: The Making of a Book Cover
Box Sets and Best Sellers Lists