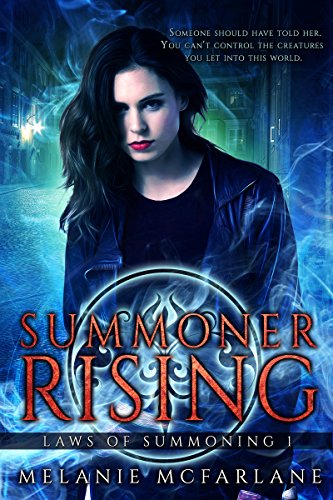 One of the best parts of my job is I get to become friends with other authors. As a reader, I could only dream to have some real-life author friends to fangirl over. But since diving into the Publishing Industry myself, I’ve made some pretty great friends in the book world, and today one of them has a new release to celebrate!

Law One: A summoner is responsible for all creatures she lets through from the netherworld.

Dacie Cantar wishes someone had explained the Laws of Summoning to her before she watched a shadowy creature crawl out of a painting at the local arcade.

But at least it explains the strange things she’s witnessed since moving in with her great-aunt, after her mother’s untimely death. But who wants to be followed by shadows the rest of their life?

Add that to being stalked by a strange boy at school, who just might be her Tovaros or soulmate, and it’s about all Dacie can handle in her new life.

As she nears her seventeenth birthday, will she be ready for her new responsibilities, or will the shadows that stalked her mother until her death, finally consume Dacie, too?

And then there’s Law Two…

Summoner Rising is available at all major book retailers. Get your copy today!

Whether it’s uncovering the corruption of the future or traveling to other worlds to save the universe, Melanie McFarlane jumps in with both hands on her keyboard. Though she can be found obsessing over zombies from time to time, Melanie focuses her powers on writing young adult stories to keep the rest of the world up reading all night.